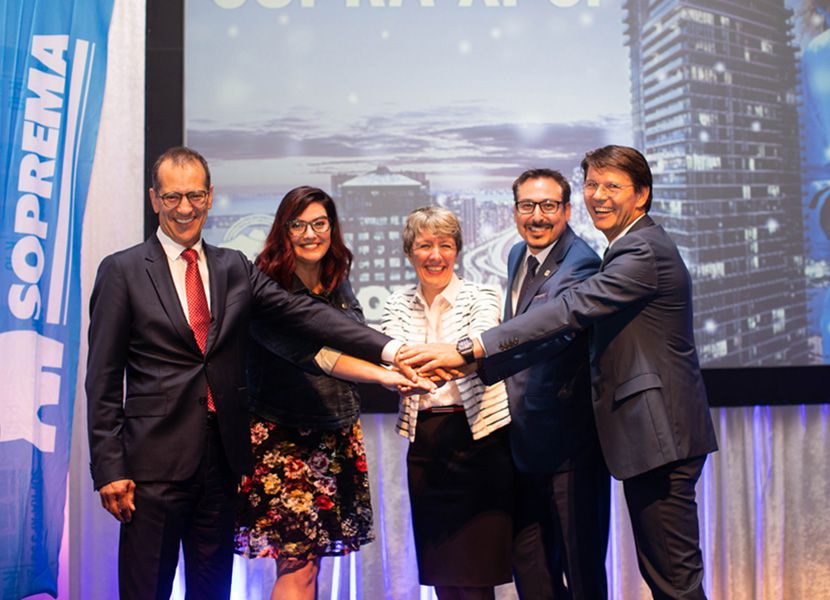 Bottom of the photo caption (from left to right): Mr. Richard Voyer, Executive Vice-President and CEO of SOPREMA, Ms. Karine Vallières, Member of Parliament for Richmond and Parliamentary Secretary to the Prime Minister (for Youth), Josée Fortin, Director General of Sherbrooke Innopole, Mr. Steve Lussier, Mayor of the City of Sherbrooke and Mr. Pierre Étienne Bindschedler, President of SOPREMA. 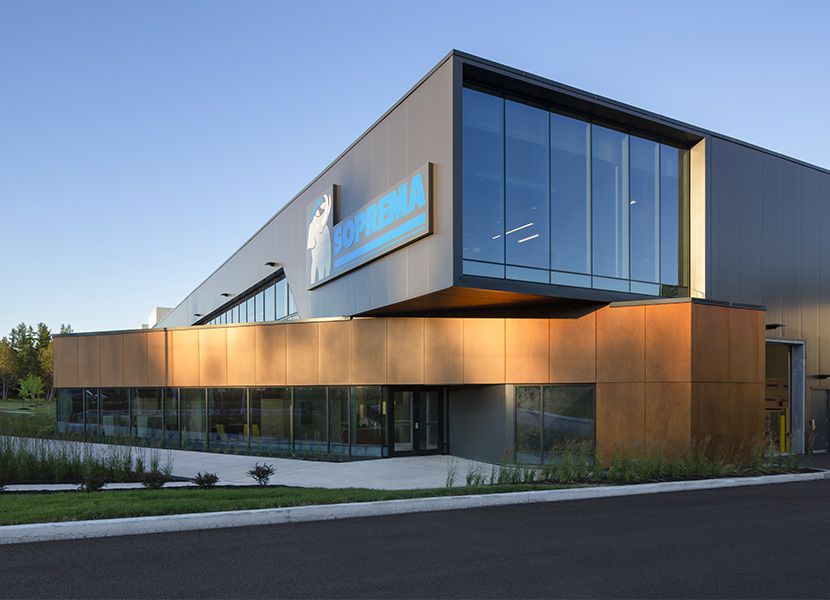 The construction and operation of the new SOPREMA plant will generate economic benefits for the region. So far, its construction has already offered employment to over 30 workers and its activities will create 15 additional jobs over the next three years.

“In recent years, SOPREMA has been working to improve its offerring and extend its expertise in areas other than waterproofing, namely, by manufacturing insulation with high energy performance and low environmental impact. We are very proud of this new plant as it consolidates our leadership as a reference point in insulation,” said Mr. Richard Voyer, Executive Vice President and Chief Executive Officer of SOPREMA North America.

Looking Back at the Construction

At the end of 2016, SOPREMA announced the acquisition of a land lot in the Sherbrooke regional industrial park on Robert-Boyd Street. Designed and created by ABCP Architecture, the construction of the 178,000 ft2 building by Construction Bertrand Dionne and several subcontractors started in the summer of 2017.

In May 2018, less than two years after the first announcement, the production line was commissioned, and the company was ready to serve its customers with a production capacity of 300,000 m3 of extruded polystyrene each year.

Employee Well-Being at the Heart of the Decisions

The production line of this plant must operate 24/7. To improve the plant employees’ working conditions, several initiatives have been put in place. They comprise a highly ergonomic production line, numerous windows in the plant, and a vegetable wall in the break room. In addition, SOPREMA has embraced ecological initiatives advocated by the city of Sherbrooke, including offering a bicycle garage for employees who wish to use the bike path leading directly to the plant, and installing many electric car charging stations.

Extruded polystyrene (XPS) is a closed-cell foam insulation shaped into rigid flat panels. It is mainly used as a thermal insulation for foundation systems, parking lots and inverted roofs, such as green roofs and plaza decks. The SOPREMA group is familiar with extruded polystyrene as it already operates four industrial sites specializing in this technology in Europe.

In carrying out this long-term project, SOPREMA was able to count on the support of the City of Sherbrooke and Sherbrooke Innopole. “SOPREMA is an inspiring multilevel company, not only as an innovative manufacturer, but also because of its strong and dynamic corporate culture. We are delighted that this multinational has chosen Sherbrooke to keep growing. SOPREMA’s implementation is a perfect contribution to our position of excellence in the Advanced Manufacturing key sector, and it will have significant economic spin-offs for the entire region,” explained Josée Fortin, General Manager of Sherbrooke Innopole.

“By choosing Sherbrooke to establish itself, SOPREMA confirms and strengthens the attractiveness of our city. The incentive tools provided by the City are bearing fruit; Sherbrooke is a competitive city to welcome companies, including international ones,” said the Mayor of Sherbrooke, Mr. Steve Lussier.

The event in pictures: browse the photo album of the event

Our XPS plant from all angles: see the architectural photos